We recently established a novel method to produce cancer-specific monoclonal antibody (CasMab). The CasMab method is the platform to develop monoclonal antibodies (mAbs), which could attack only cancer cells. This method is useful for not only producing CasMabs against novel targets but also replace the existing mAbs into the side effect-free ones. We can try to develop antibody drugs again against many targets, which were excluded from antibody-drug candidates. We also produce CasMabs against malignant brain tumors and malignant mesotheliomas, which are still difficult to be cured. Many strategies have been tried to produce mAbs; however, there have been several problems about focusing on molecular targets and the screening methods. For instance, the high tumor/normal ratio about antigen expression using DNA microarray has been thought to be important when we determine the molecular targets for antibody-drug. Although many antigens are expressed highly in tumors, those antigens have been removed from the candidates of antibody-drug targets because they were also expressed in normal tissues. If we try to detect the difference of glycans between cancer cells and normal cells using mass spectrometry, the heterogeneity of glycan attachment on glycoproteins make its detection more difficult. Furthermore, the production of sufficient O-glycoproteins for immunization is still difficult, even if specific O-glycans were discovered in cancer cells. Therefore, we developed CasMab method to solve these problems.

When one protein in cancer cells and normal cells possesses the same amino acid sequence, the post-translational difference such as glycans should be utilized to produce the CasMab. Several important technologies are necessary; i) the production of special cell lines, which attach the cancer-specific glycans to membranous proteins, ii) the production of immunogens by transfecting target molecules into special cell lines, iii) the development of tagging technology to purify the membranous proteins, and iv) the development of antibody-engineering technologies. We have already produced CasMabs against human podoplanin, a cancer metastasis-inducing protein using those technologies. Podoplanin is expressed in many cancers; in contrast, it is also expressed in normal cells such as lymphatic endothelial cells and lung type I alveolar cells. Therefore, producing antibody-drugs against podoplanin has been thought to be difficult. The CasMabs against podoplanin may make it possible to cure podoplanin-expressing tumors such as brain tumors, lung cancers, esophageal cancers, and malignant mesotheliomas. Furthermore, we recently developed a novel tagging system, PA tag system, to purify the membranous proteins, which are difficult to be purified. In this project, we will refine our technologies and develop CasMabs against several molecular targets. 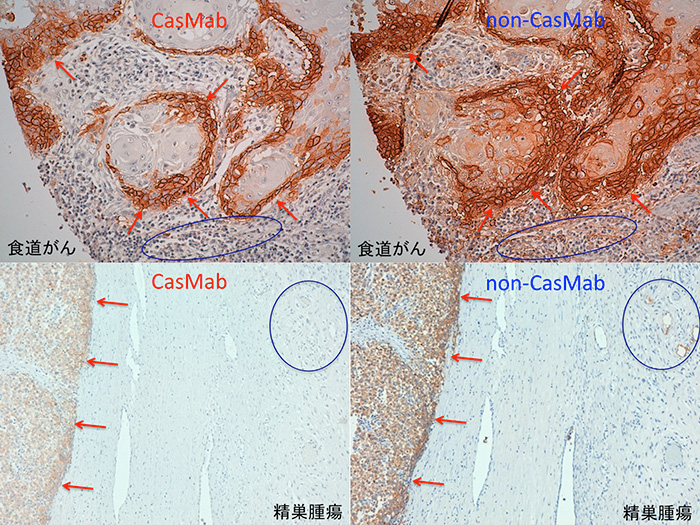 Both CasMab (left panel) and non-CasMab (right panel) react with cancer cells (red arrows) of esophageal cancer and testicular tumors. CasMab does not react with normal cells (blue circles), although non-CasMab recognizes them. Therefore, CasMab can attack only cancer cells.