AMED President Makoto Suematsu, due to his active involvement in promoting Japan’s cooperation with Lithuania in the field of medicine, was awarded with State Award of the Republic of Lithuania – Cross of Officer of the Order for Merits to Lithuania. This Award is presented to the citizens of Lithuania and foreign nationals for their merits to Lithuania and promotion of the name of Lithuania in the world. President Suematsu is the sixth Japanese national, awarded with the Cross of Officer since the restoration of Lithuanian independence in 1990. The privilege and honor to present State Award to President Suematsu was assigned to Gediminas Varvuolis, Ambassador Extraordinary and Plenipotentiary of the Republic of Lithuania to Japan.

Significant impulse to Japanese-Lithuanian biomedical collaboration was given when in 2017 AMED and Ministry of Health of the Republic of Lithuania signed Memorandum of Cooperation (MoC), promoting collaboration between the countries in the fields of rare and undiagnosed diseases, oncology, exchanges of young biomedical researchers for basic and clinical research and other fields of mutual interest.

Since the signature of MoC, President Suematsu cooperated in the research of refractory and undiagnosed conditions, conducted by universities of Japan and Lithuania. In the cooperation, genetic data of 34 undiagnosed patients in Lithuania were compared with similar patients in Japan in the framework of Initiative on Rare and Undiagnosed diseases (IRUD), which is led by AMED. As a result, nine patients out of 34 were diagnosed because patients with similar genetic mutations were found in Japan. Some of them could improve their symptoms due to enabling their doctors to start adequate treatment.

MoC also paved the way for joint scientific events, first of which will be jointly held by AMED and Ministry of Health of Lithuania in Vilnius on June 24th, in cooperation with prominent Lithuanian genome-editing scientist Prof. Virginijus Siksnys. President Suematsu also became international advisor to the Faculty of Medicine of Vilnius University, and very influential participant in high-level biomedical events in Lithuania.

“I think that it is a great honor to be awarded with such splendid the Cross of Officer of the Republic of Lithuania. I owe this award to researchers and co-medical staffs who took large effort for patients of rare and undiagnosed diseases and their family through IRUD, and would like to thank all of the people who cooperated. Global data sharing and international cooperation should give much more results than an effort made by only one researcher.
AMED intends to make more efforts towards relief of patients as soon as possible through building up such international network.” 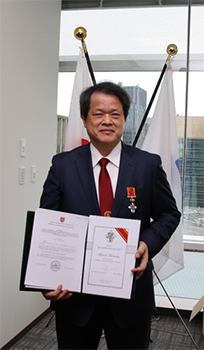 President Suematsu, AMED presenting the State Award of the Republic of Lithuania.

H.E.Mr. Gediminas Varvuolis, Ambassador Extraordinary and Plenipotentiary of the Republic of Lithuania to Japan and President Suematsu, AMED shaking hands.