Since its establishment in April 2015, AMED has been promoting medical R&D with a mission of “delivering the research results to patients and their families as soon as possible by practical utilization.” As part of our efforts to carry out this mission, we have formulated the Basic Policy to provide basic matters regarding the handling of R&D Data at AMED, and these Guidelines to set forth details thereof, to promote utilization of data generated through R&D based on cooperation between industry, academia and government as well as with patients and the public. The Basic Policy applies to all R&D Data supported by AMED and represents AMED’s thinking and policy on the handling of AMED’s R&D Data. These Guidelines provide a more detailed explanation of data utilization methods, and the mandatory submission, functions and roles of the Data Management Plan.

In the field of medicine, the data sharing of data generated as a result of R&D has long been considered invaluable, especially for R&D using “unique data” which is not immediately replicable; and there is an increasing demand for furthering of open science based on an “open and closed strategy”.
In parallel, given the public nature and utility of data generated by publicly funded R&D, there is a movement to expand possibilities for secondary use of such data by way of storing the data in repositories, timely disclosures and other measures.
Further, with the aim of applying results of R&D to practice, there have been calls for using clinical data and genome information, etc., to develop new diagnostic and treatment methods through cooperation not just within academia such as universities and research institutes but also with industry including, but not limited to, private companies.
AMED has also promoted the following measures in relation to the handling of data generated as the result of R&D.

Regarding R&D topics funded by AMED that require data to be organized and systematized (compiled into a database), AMED examined the appropriate handling of data generated as a result of AMED R&D by being aware of the location, etc. of research data based on the Data Management Plan. 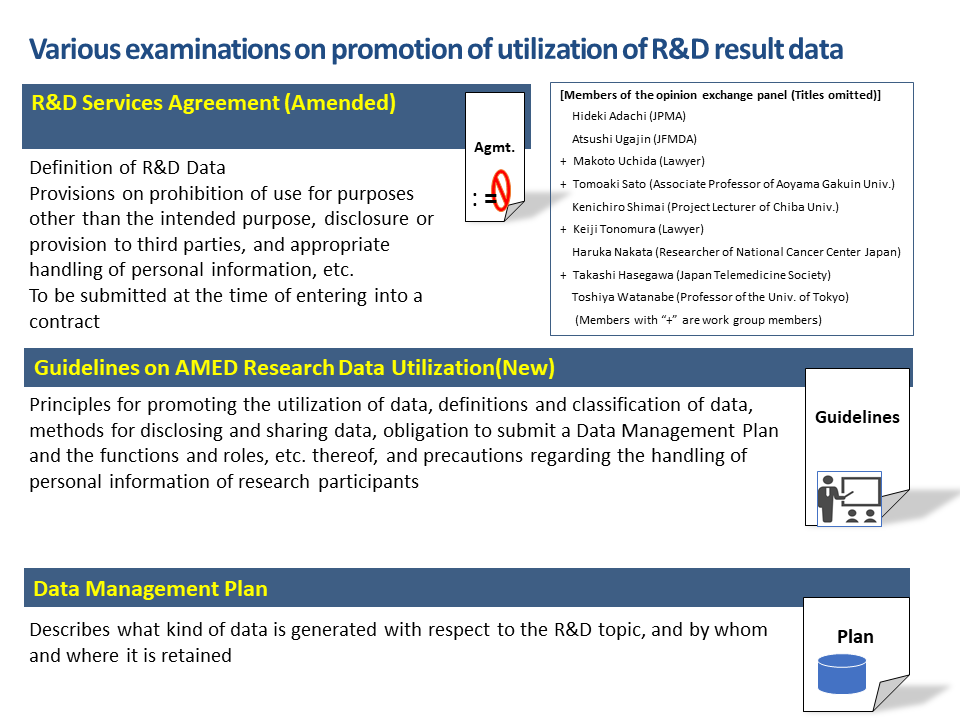 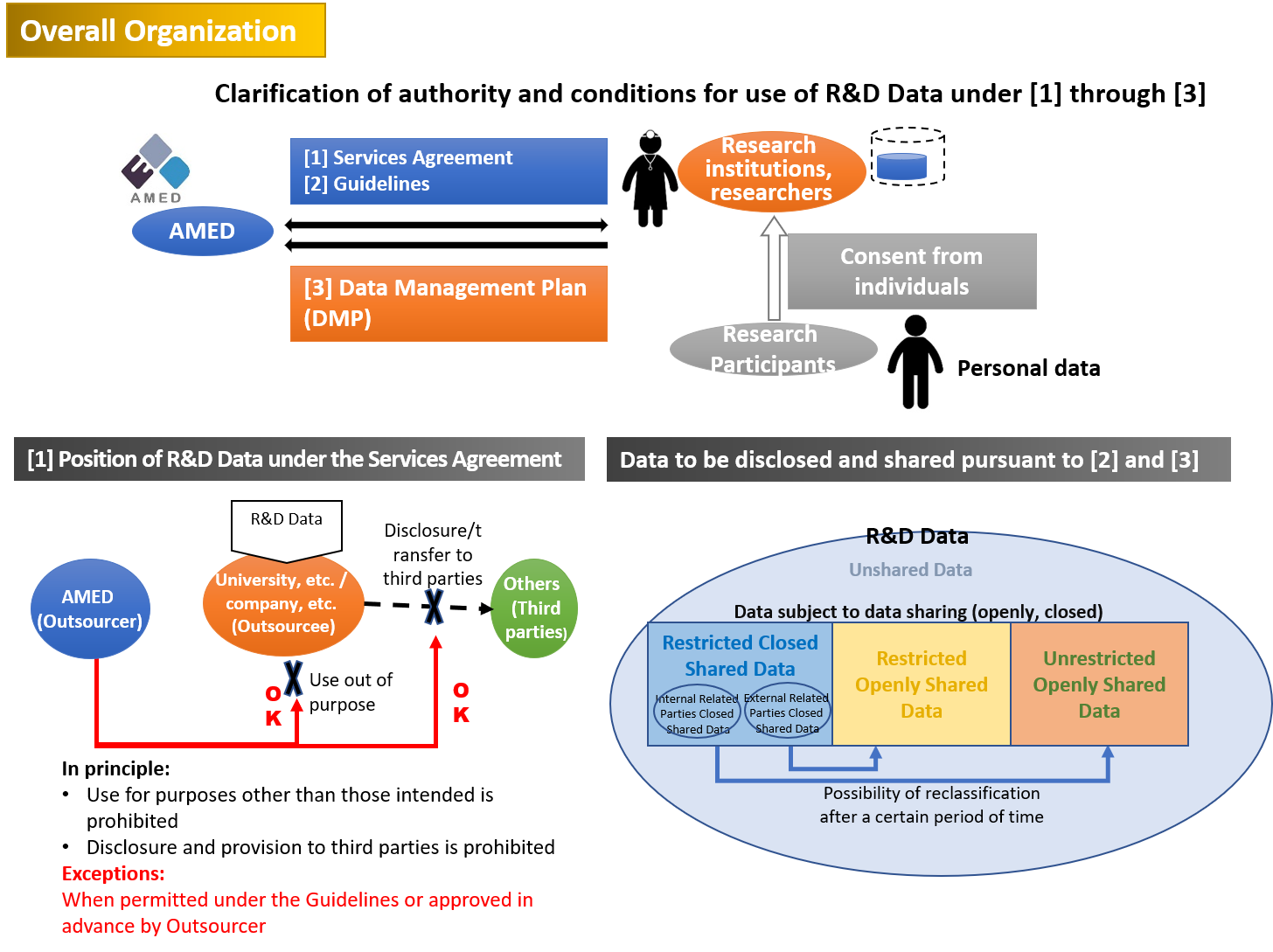 In the future, it will be important to make preparations from the time of commencement of R&D, such as obtaining consents on the premise that data will be provided to companies and other organizations so as to promote early practical implementation and secondary usage of data generated through AMED R&D. Further, providing information such as results of R&D to third parties requires careful handling in the medical field, where personal information (including special care-required personal information) such as patient records, medical records, samples are handled often.
For that reason, AMED plans, in compliance with the Act on the Protection of Personal Information, to review what matters are necessary in an agreement on third party transfer of personal information to promote use of personal information including the future use and provide a template. (To be published in the future.)
Further, in order to facilitate more efficient data sharing and provision of data to third parties such as companies, we have prepared a Data License Agreement template for use between a data provider (researcher, etc.) and a data recipient (third party). 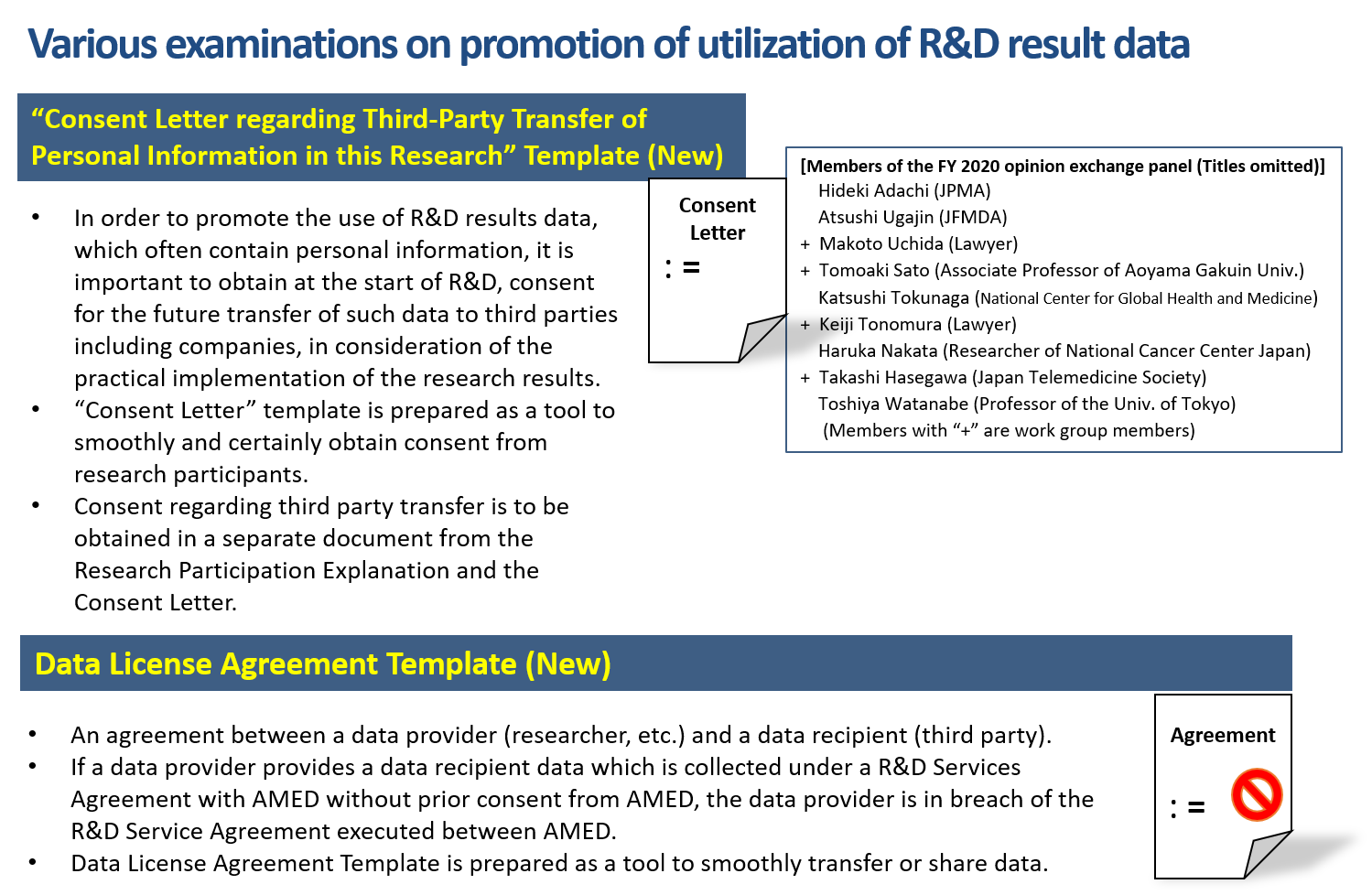 In order to promote usage of data generated as the result of AMED R&D, it is necessary to establish the foundational platforms and systems for safe, secure and efficient usage of data which is subject to quality management in joint R&D between industry and academia.
AMED considers that, for promoting usage of data, it would be effective for AMED to provide information on available AMED R&D Data (preparation and publication of a catalogue) and to offer a data usage concierge service to make the data more accessible to users, and as such AMED plans to examine what measures it should take establish such infrastructure.