AMED is involved in diverse international collaborative research and cooperation initiatives. The Department of International Affairs takes on a central role in AMED's global affairs.

AMED promotes international collaborative research projects. Under the International Collaborative Research Program: Strategic International Collaborative Research Program (SICORP), which is based on inter-ministerial agreements with other countries, collaborative research is about to be launched with Singapore's Agency for Science, Technology and Research (A*STAR), with which AMED concluded a memorandum of cooperation (MOC) in March 2016. Other initiatives include the e-ASIA Joint Research Program, which aims to solve issues commonly shared across Asia, and the U.S.-Japan Cooperative Medical Sciences Program, which has been ongoing for more than 50 years under a bilateral agreement between the United States and Japan. SATREPS, the international project for collaborative research in the medical field that aims to resolve global-scale issues with developing countries in conjunction with official development assistance (ODA), is attracting global attention as a unique program for leveraging ODA to achieve comprehensive innovation. Furthermore, at the 2015 meeting of the Global Research Council*, Prime Minister Shinzo Abe announced the launch of a new international collaborative research initiative focused on neglected tropical diseases (NTDs) in Africa, and a concrete program is currently undertaken to achieve this.

The department also hosts international workshops for exploring the launch of new international collaborative research and conclusion of MOCs.

A forum comprised of the heads of science and engineering funding agencies from around the world. Its aims are to explore further roadmaps for international collaborative research and confirming common principles for promoting international research cooperation. It was advocated by the National Science Foundation (NSF) and established in May 2012 in Washington, D.C. 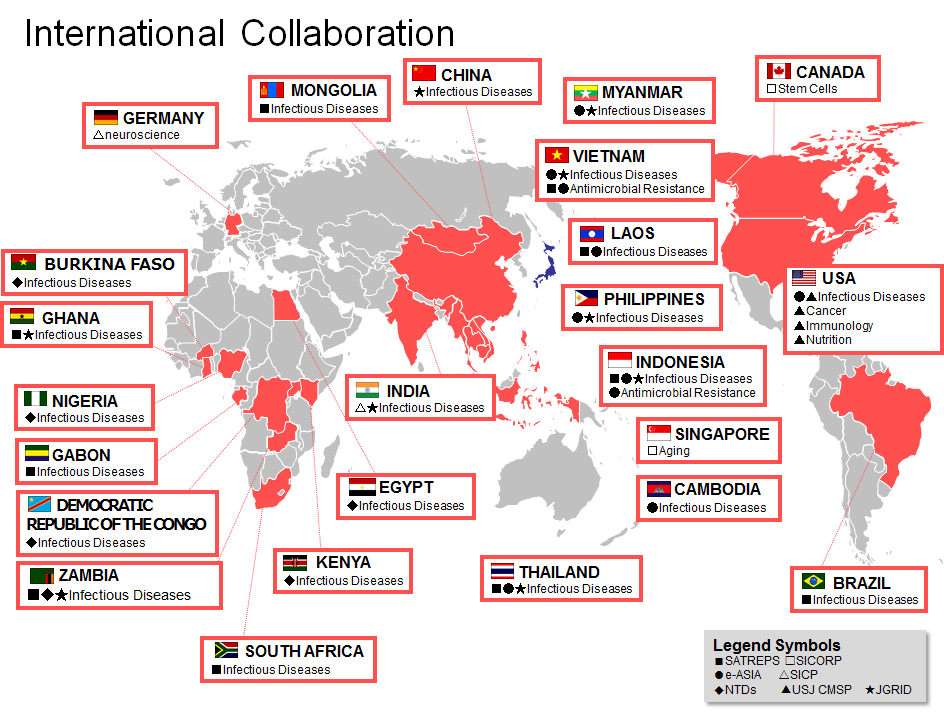 Participation in International Alliances and Consortia

AMED has built networks of multilateral funding agencies across the world with the aim of addressing global issues. AMED is a member of the six alliances shown in Table 1 below. To collaborate with the alliances, AMED supports their research undertaken in Japan.

In pursuing international collaborative research with organizations around the world, it is becoming increasingly necessary to perform research evaluation in English in line with international standards. AMED has already started switching the official language to English in some of its programs, and is also focusing on human resources development for this purpose.

The knowledge and experience accumulated by Japan in the field of health care so far, as well as its advanced technologies, are powerful weapons in the fight against many issues of global health. AMED aims to contribute to solving global health issues using Japan's strengths. These efforts will contribute to the attempt to achieve Universal Health Coverage, as agreed by all UN Member States.

AMED has opened three overseas offices, in Washington, D.C., London, and Singapore. These offices help AMED perform its initiatives from a global perspective.

The Washington D.C. Office covers North, Central and South America; the London Office, Europe, Africa, and the Middle East; and the Singapore Office, Asia and the Pacific region. The main roles of the offices are collecting information and trends on medical research; facilitating cooperation and collaboration with foreign funding agencies and institutions on medical research and development; and disseminating and sharing knowledge of the results of Japan's research and development.