Global Successes Surveillance of Malaria and Other Parasitic Diseases in Laos 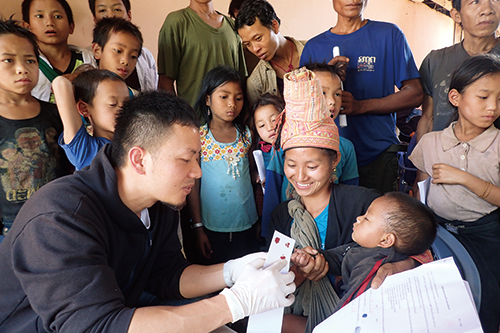 AMED is supporting the development of innovative research techniques for the control of parasitic diseases in Laos. The study, in collaboration with the Japan International Cooperation Agency (JICA), is one of nine that AMED is currently conducting in the field of infectious disease control in developing countries as part of SATREPS.

Dr. Shigeyuki Kano (National Center for Global Health and Medicine) and his study group – in close collaboration with researchers from the Institut Pasteur du Laos, Center of Malariology, Parasitology and Entomology,etc. – are studying the molecular genetic epidemiology of malaria and other parasitic infectious diseases. The aim of which is to control epidemic spread and disease based on scientific knowledge.

The study involves monitoring endemicity and developing new diagnostic methods for malaria and other parasitic diseases, such as opisthorchiasis and schistosomiasis. In addition, the team is working to elucidate emergence mechanisms and prevent the expansion of drug-resistant malaria. Scientific evidence obtained in the study is utilized to assist health services in the control of parasitic disease in Laos.

The study has already produced a number of outcomes. Dr. Kano and his team developed new gene diagnostic methods (LAMP, etc.) for various parasitic diseases, and a highly sensitive diagnostic method (ELISA) for schistosomiasis. Many cases of drug (artemisinin) resistant malaria were discovered in the southern provinces of Laos – those most impacted by the endemic. It was also found that the resistant malaria was spreading north. Also, by using the gene diagnostic method, the team discovered that there were many asymptomatic malaria parasite carriers, most of which could not be detected using standard methods (microscopy and rapid diagnostic test kits).

The team is currently monitoring and analyzing endemicity in detail, and working to validate the developed diagnostic methods. Going forward, they will make policy recommendations on parasitic disease control to the Ministry of Health in Laos.

Support studies to monitor genetic endemicity and develop new diagnostic methods for malaria and other parasitic diseases. Elucidate emergence mechanisms and the expansion of drug-resistant malaria. Contribute to parasitic disease control in Laos.

New rapid gene diagnostic methods have been developed for parasitic diseases. The epidemic status of drug resistant malaria is closely monitored in endemic areas, while spreading patterns are constantly analyzed. The newly developed gene diagnostic method led to the discovery of asymptomatic malaria parasite carriers – most of which could not be detected using standard methods of diagnoses.