Events A first symposium of AMED in Washington, D.C. was held in March, 2018

A first symposium of AMED in Washington, D.C.

― Bringing Together the US and Japan medical R&D, and the challenge today of the Japan Agency for Medical Research and Development (AMED) ― 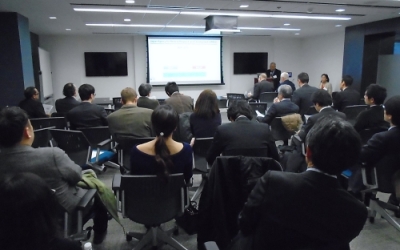 The AMED Washington, D.C. Office working with AMED headquarters has been working to build up relationship with the U.S. related organization and researchers since its opening on November 1, 2016. A symposium with a reception was held on March 19, 2018 to think back on its activities since its opening and to share prospects for the future collaboration. The over 40 guests attended as the result of the networking activities of AMED Washington, D.C. Office.

The symposium, at the 2000M Conference Center near the office, started with opening remarks by Dr. Aikichi Iwamoto, the Managing Director of Department of Research Promotion of AMED. He made two presentations entitled “Missions and Challenges of AMED” and “Project activities of the AMED during its first 3 years”. Next, three other presentations were made by U.S. guest speakers:

Finally, Ms. Takiko Sano, the Director of Washington, D.C. Office talked about “Activities of the AMED Washington D.C. Office”. After those presentations, a Q and A session took place with meaningful discussions.  At the end, Mr. Tomohiko Arai, the Science Counselor of the Embassy of Japan gave closing remarks.

After the symposium, a reception was held at the AMED Washington, D.C. Office on Connecticut Avenue. Dr. Roger Glass, the Director of the Fogarty International Center gave a short speech and proposed a toast. The reception offered a pleasant atmosphere with a good opportunity for networking.