Presentation made at the 4th SAJU Forum Conference

The South Africa-Japan University (SAJU) Forum was established as a collaborative framework among higher education institutions in Japan and South Africa, and once every two years the SAJU Forum Conference is held at a location alternating between the two countries.

The 4th SAJU Forum Conference was held from the 23rd to 24th May 2019, at the Future Africa Campus of the University of Pretoria in South Africa. The conference focused on the theme of “the human being in the 21st century in the context of global changes”, gathering together many researchers and other stakeholders from Japan and South Africa to engage and interact through the sharing of their research.

AMED was invited to attend the Conference as a funding agency in the medical field from Japan, alongside the Japan Society for the Promotion of Science (JSPS), Japan International Cooperation Agency (JICA) and the Japan Science and Technology Agency (JST). Participating organisations from South Africa included the National Research Foundation (NRF), the Department of Science and Technology (DST), the Department of Higher Education and Training (DHET), and the International Education Association of South Africa (IEASA).

During a session on “modalities of research support for collaboration, student and staff mobility”, Dr TAKAGI Ryo, Director of the AMED London Office gave an overview presentation of AMED and its functions. The presentation explained AMED’s role in managing Japan’s R&D resources in medical fields, how AMED supports research seamlessly across the spectrum from basic research to clinical application, the AMED system of 5 cross-sectional projects and 4 disease area-specific projects, as well as AMED’s implementation of international research programmes. Dr TAKAGI also introduced several joint research programmes run by AMED in Africa, focusing on the topic of infectious disease, and he expressed AMED’s gratitude for collaboration with African researchers and best wishes for the continued success of this cooperation. 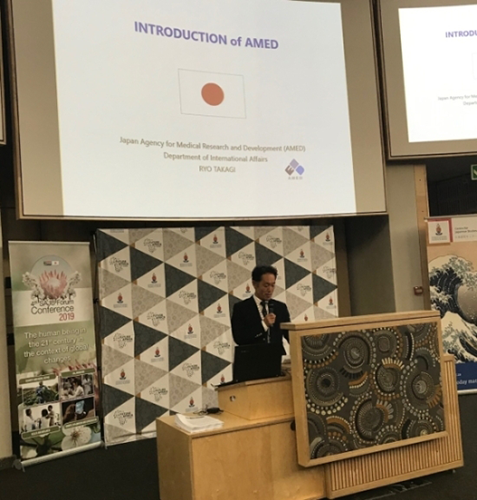