The fair was started in 1984, and the main theme this year was “Science, Technology and Innovation: Inspiring Creativity for Better Living and Sustainability for the Nation”. There were total 103 ministries, government agencies, companies and organizations from Thailand and abroad exhibiting and participating, and had over 1 million visitors during the event.

AMED Singapore Office was invited by the Embassy of Japan in Thailand to a part of the Japan Pavilion this year. Three AMED R&D results were introduced; one from Science and Technology Research Partnership for Sustainable Development (SATREPS) Programme, ” Integrative Application of Human and Pathogen Genomic Information for Tuberculosis Control” by Professor Tokunaga Katsushi at The University of Tokyo, other two from Research Program on Practical Application of Health Technology for Developing and Emerging Countries, ”Research and Development of Ultra-Sensitive Species-Specific DNA Testing Systems for Higher Detection Rates of Patients with Malaria Parasite Infections” by EIKEN CHEMICAL CO., LTD, and “Clinical Research on Retinal Degenerative Diseases Using iPS Cell-Derived Retinal Pigment Epithelium” by Dr. Masayo Takahashi at RIKEN.

On the second day, Dr. Weerapong Paesuwan, Chairman of the Advisory Committee of the Minister of Higher Education, Science, Research and Innovation visited to the AMED booth. There also were many visitors who showed great interests in Japanese medical technologies. 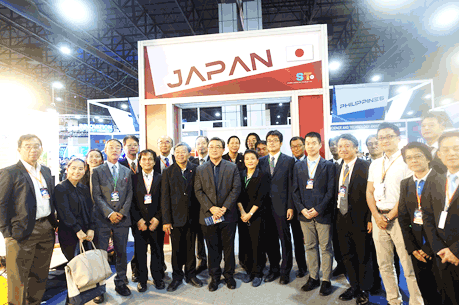 Group Photo in the JAPAN Pavilion

The following photos are; representative of AMED Singapore Office was explaining AMED R&D results to Dr. Weerapong Paesuwan, Chairman of the Advisory Committee of the Minister of Higher Education, Science, Research and Innovation, and also other visitors. 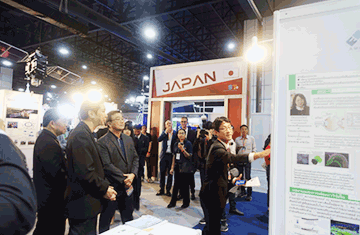 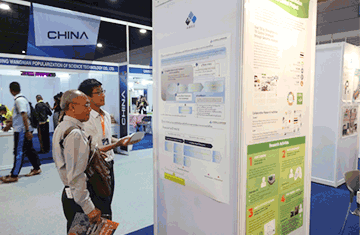