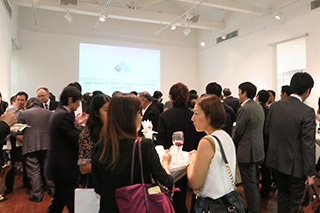 Entrance of the AMED Singapore Office

The AMED opened its Singapore Office as its first overseas site on June 27, 2016, the year of the commemorative 50th Anniversary of the establishment of Japan-Singapore diplomatic relations. Located in the Singapore Science Park, which is the country's first research, development and technology hub near the National University of Singapore, the Singapore Office is a 10-minute drive from Singapore's Agency for Science, Technology and Research (A*STAR), with which AMED concluded a memorandum of cooperation on March 16, 2016.

The expected roles of the office includes that investigation of trends on medical research and development from various points of view, facilitating networking, cooperation and collaboration with funding agencies and other related institutions, and disseminating and sharing knowledge of the results of Japan's research and development in the Asia and Pacific region.

On June 27, 2016, AMED co-hosted an opening reception for the Singapore Office with the Embassy of Japan in Singapore at the Japan Creative Center, a base for publicizing Japanese culture at the heart of Singapore. The reception was attended by around 90 guests from government organizations, universities, research institutes, companies, media representatives and others, including Mr. Lim Chuan Poh, Chairman of A*STAR, and Mr. Kenji Shinoda, Ambassador of Japan to Singapore.