Ceremony held at the Embassy of Japan in the UK

Dr Ryo Takagi was inaugurated as the second Director of the AMED London Office, having taken on that role in June 2019. To mark this occasion, a ceremony was held celebrating the continued scientific partnership and interaction in medical research between Japan and the UK, in collaboration with the Embassy of Japan in the UK on the 20th September 2019. The ceremony was attended by approximately 90 people from across the research and industrial communities of the UK and Japan, and brief speeches were made by Mr Koji Tsuruoka, Ambassador of Japan to the UK, by Professor Fiona Watt, Executive Chair of the Medical Research Council with which AMED has signed a Memorandum of Cooperation in medical research, and by Professor Rory Collins, CEO of the UK Biobank. It was a wonderful occasion to look back on the various collaborative achievements made by AMED with its UK partners, and to look towards an active continuation and further development of those partnerships in vital fields of medical research and development. 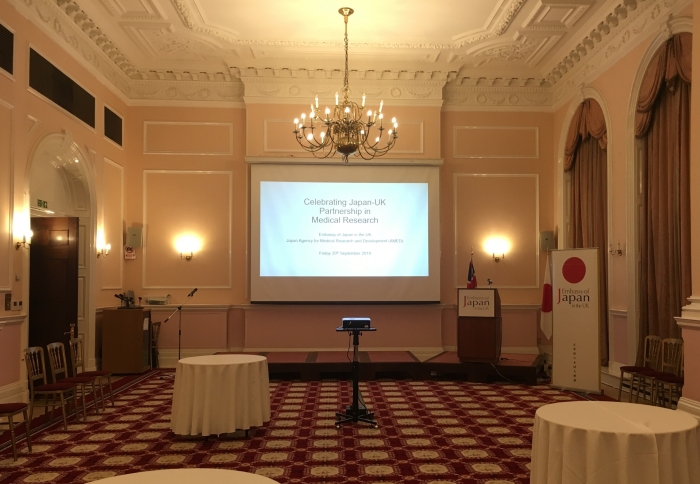 AMED signed a Memorandum of Cooperation with the Medical Research Council (MRC) in 2017, and Japan and the UK have enjoyed close collaboration in medical research fields over the three years since that time. Both AMED and the MRC support a wide range of medical R&D programmes across the spectrum from basic to applied research, and in their Memorandum of Cooperation they agreed to work together to accelerate medical R&D through collaboration in the mutually-prioritised areas of infectious disease, antimicrobial resistance, regenerative medicine, and dementia.

In addition to the above examples of bilateral cooperation, AMED and the MRC are also both active members of the Global Alliance for Chronic Diseases (GACD).
Beyond these activities, the AMED London Office has also organised events for Japan-UK research interaction focusing on themes around health ageing, biobanks and cohort studies.

This ceremony was held as part of the Japan-UK Season of Culture – an initiative to showcase Japan’s multifaceted appeal, from its culture and art to innovation and cutting-edge technology in areas such as medicine, science and industry.