Collaboration/cooperation with external institutions 50th Anniversary Celebration of the U.S.-Japan Cooperative Medical Sciences Program and Activities under the Program

50th Anniversary Celebration of the U.S.-Japan Cooperative Medical Sciences Program (USJCMSP) and Conclusion of a Memorandum of Cooperation (MOC) between AMED and the NIH (January 11, 2016) 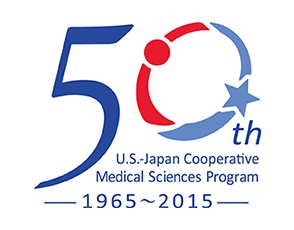 The U.S.-Japan Cooperative Medical Sciences Program (USJCMSP) was launched in 1965 based on a joint statement made by then Japanese Prime Minister Eisaku Sato and U.S. President Lyndon Johnson with the objective of carrying out research on diseases that are endemic in the Asian region, including infectious diseases, immunology, cancer and nutrition and metabolism. The 50th Anniversary celebration of the program was held in January 2016 in Bethesda, Maryland, the United States, with about 400 U.S. and Japanese guests. At the opening ceremony, Dr. Anthony S. Fauci, Director of the National Institute of Allergy and Infectious Diseases (NIAID), delivered an opening speech. This was followed by welcoming remarks from Japanese representatives, Ms. Fusae Ota, Parliamentary Vice-Minister of Health, Labour and Welfare, and Ambassador Kenichiro Sasae, Ambassador Extraordinary and Plenipotentiary of Japan to the United States, and a U.S. representative, Ambassador Jimmy Kolker, Assistant Secretary for Global Affairs at the U.S. Department of Health and Human Services. After the ceremony, a reception was held at the National Academy of Sciences in Washington, D.C., where speeches were delivered by Ms. Fusae Ota, Parliamentary Vice-Minister of Health, Labour and Welfare; Dr. John P. Holdren, Assistant to the President for Science and Technology; Ms. Anne Hall, Acting Principal Deputy Assistant Secretary of State for Oceans and International Environmental and Scientific Affairs; Dr. Ralph J. Cicerone, President of the National Academy of Sciences; and Dr. Anthony S. Fauci, Director of NIAID, NIH. Subsequently, the MOC was signed by AMED President Makoto Suematsu and NIH Director Francis S. Collins, and their speeches followed. 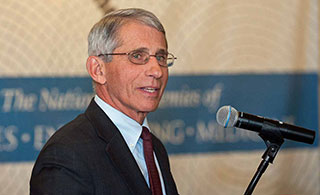 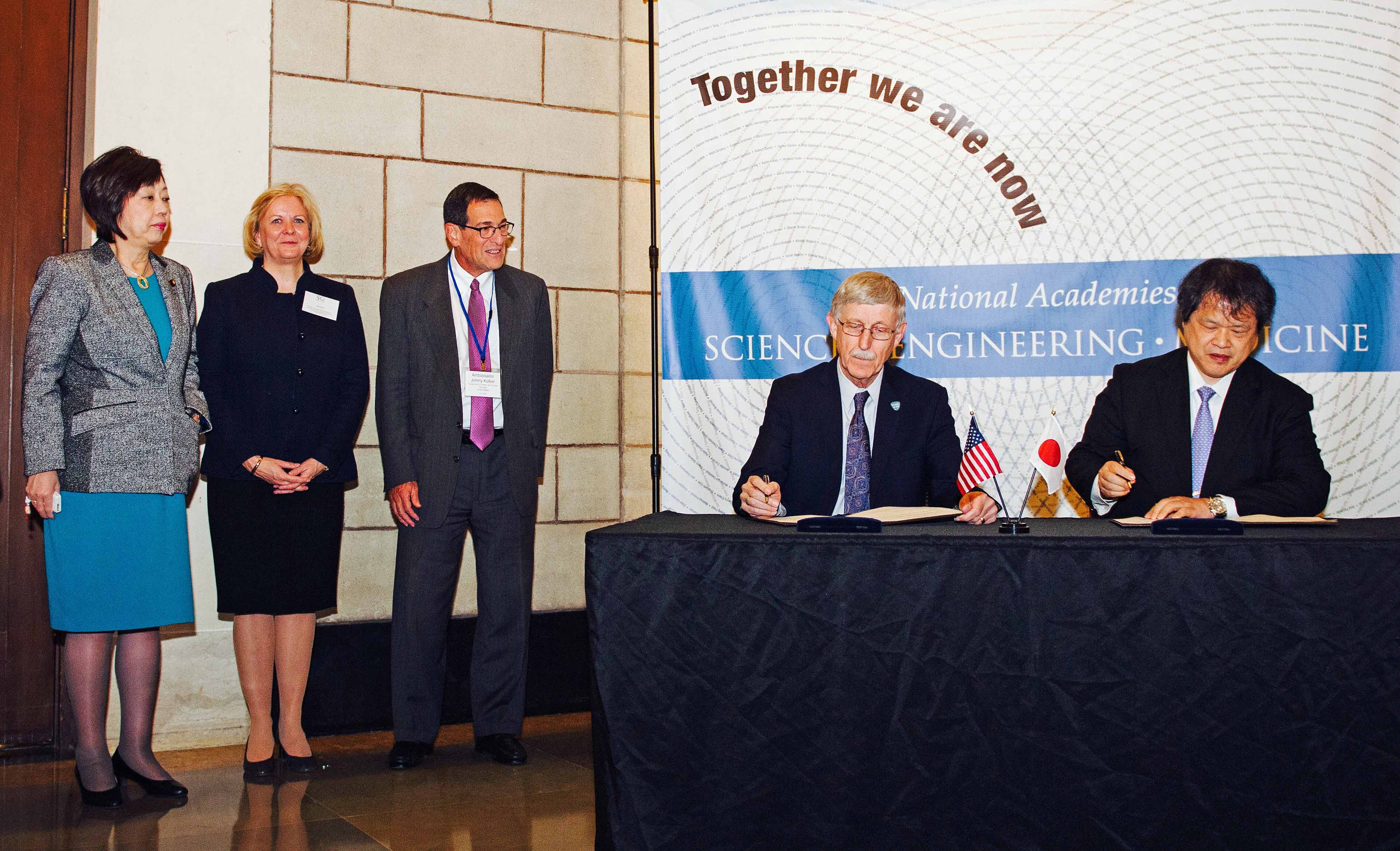 Signing ceremony of the MOC concluded between AMED and the NIH

Posters for the 50th Anniversary of the USJCMSP and related series of meetings
※Click the image to see the enlarged image.

The USJCMSP 50th Anniversary celebration was followed by the 18th International Conference on Emerging Infectious Diseases (EID) in the Pacific Rim, where presentations on research accomplishments were delivered in all 10 USJCMSP Panel/Board research areas, including all those pertaining to viral, bacterial and parasitic diseases, under the theme of new research technologies and innovation. In addition, USJCMSP individual Panel meetings were held, with nine Panels (excluding the Joint Immunology Board) holding U.S.-Japan joint meetings. At the USJCMSP Joint Committee Meeting, updates were confirmed on many of the items in the Kyoto declaration prepared upon the 40th Anniversary of the USJCMSP. In the milestone 50th Anniversary year, the Bethesda declaration was prepared and was approved at the Joint Committee Meeting held in February 2017. It was agreed that a declaration would be prepared every five to 10 years as a documentation of principles for the USJCMSP activities.

In commemoration of the 50th Anniversary of the USJCMSP, AMED and the NIAID launched a joint call for international collaborative research project proposals. Applicant teams were required to include early-stage or female investigators, and be composed of: (1) Japanese and U.S. researchers, (2) Japanese, U.S. and Asian researchers, or (3) U.S. and Asian researchers. The collaborative research proposals were solicited in the fields of infectious diseases, immunology and nutrition, and were required to be prepared in English. This was AMED's first international joint call for proposals in English. The secretariat staff members at AMED and the NIAID coordinated closely to align the research policy, solicitation details, review methods, budgets, and many other details of the program. The proposed projects were reviewed by a joint review panel composed of six Japanese and six U.S. infectious disease researchers by using a web and teleconference system. A total of 29 proposals were received during the call period from July to the end of September, including 24 proposals submitted by teams that included Japanese members. As a result of the three review panels; focused on Viral, Bacterial and Parasitic Diseases conducted in English, AMED and NIAID decided to award 13 research projects. With many proposals submitted by early stage or female investigators with high motivation for international collaborative research with the United States and Asian countries, as well as non-Japanese investigators based in Japan and Japanese investigators based in the United States, the joint call was highly significant in view of supporting the development of investigators who can collaborate beyond borders.