The Initiative on Rare and Undiagnosed Disease (IRUD) is a clinical research program for patients with a rare disease. Due to the complications of their symptoms many sufferers remain undiagnosed even when seen by a medical professional. Moreover, so little is known about the etiology of rare diseases that very few treatments can be administered due to lack of development.

In 2015 the Japan Medical and Research Development Agency (AMED) launched IRUD as part of the Rare/Intractable Disease Project of Japan. The nation-wide research group aims to support the diagnosis of patients with undiagnosed disease via data sharing and promote research into pathology that may lead to the development new treatments and therapies.

IRUD’s existence is only possible due to cooperation from across the nation and from the international community. This comes from, but is not limited to: patients, families, physicians, medical staff, researchers, research supporters, grant agencies, administration, and many other stakeholders throughout the Japan.

To perform its role IRUD has established:

AMED maintains close ties to the Ministry of Health, Labour and Welfare regarding implementing medical services for Nan-Byo patients (Nan-Byo is a legally defined group of diseases characterized by their rare and intractable nature), and to local governments in creating policy measures against Nan-Byo.

An IRUD approach to research and development

Japan’s Initiative on Rare and Undiagnosed Diseases (IRUD): Towards an end to the diagnostic odyssey 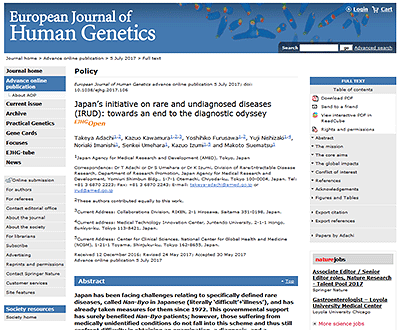 Since its launch in 2015, IRUD’s policy was documented in an article in the European Journal of Human Genetics (doi: 10.1038/ejhg.2017.106). It reports the funding mechanisms for its creation which draws on Japan’s strengths such as its long history of pursuing Nan-Byo. 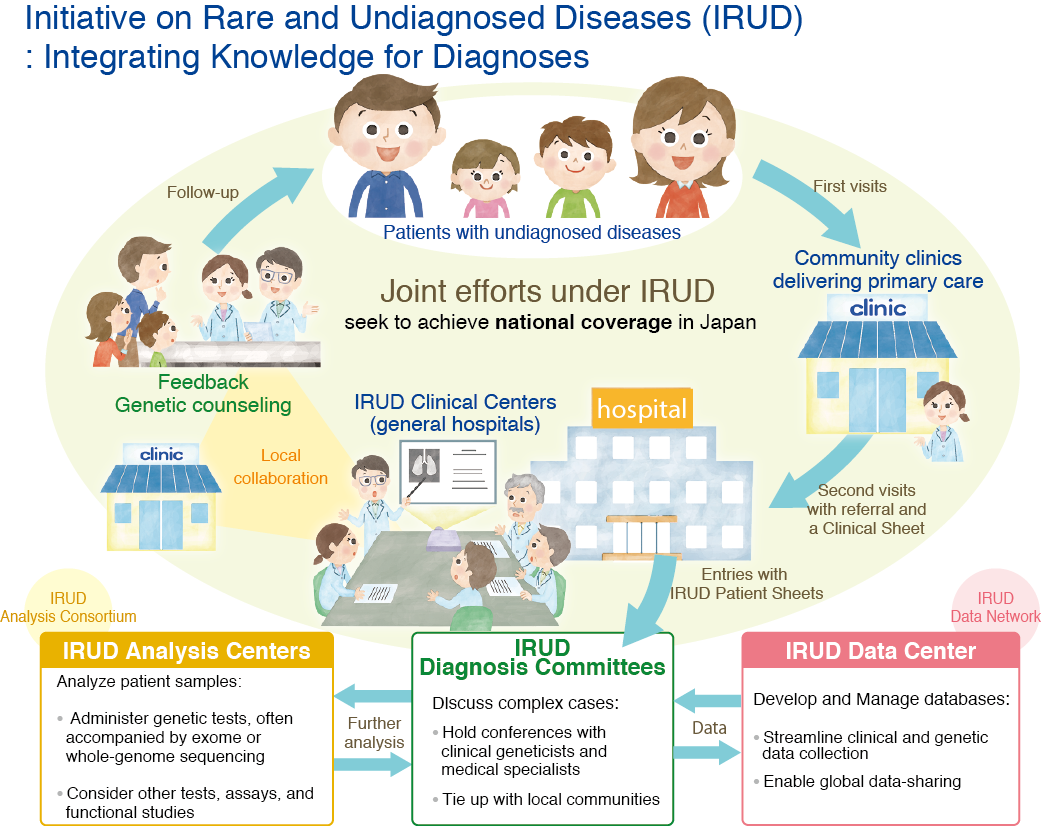 IRUD Beyond was established combining new grounds to advance the research efforts from IRUD. It comprises three pillars:

Current research (as of December 2018)

Initiative on Rare and Undiagnosed Disease (IRUD): Study for the development of a diagnostic program
Principal Investigator: Hidehiro Mizusawa - National Center of Neurology and Psychiatry
In force as of 2018 Link to work (IRUD Portal)

Beyond diagnosis
Elucidation of their molecular pathology of rare disease genes found via IRUD-P with genome editing and research into therapeutic/prophylactic methods
Principal Investigator: Yoichi Matsubara - National Center for Child Health and Development
Initiated since 2017
*IRUD-P – Initiative on Rare and Undiagnosed Diseases in Pediatrics

Research for the development of ‘Initiative on Rare and Undiagnosed Diseases in Adults’
Principal Investigator: Hidehiro Mizusawa - National Center of Neurology and Psychiatry
Conducted during 2015-2017